Today our training called for us to run a Half Marathon which we did, 6.55 out and back. It was cold but not super windy so it wasn’t too bad. I did our usual run/walk cycle for long runs of 9 minutes on, 1 minute off which so far has been working for me.

Our time was 2:37 which included a couple of longer walks for ‘aid station breaks’ and one stop to stretch. That time is as fast as my second PR and 10 minutes slower than my current PR. For a RSS it was maybe a 7. We could have gone faster but we’re both not in the best shape leg wise so there was no need to push it. 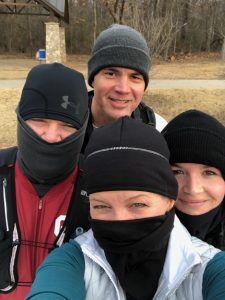 After the road half we did a few miles of trail jogging with a couple of friends. Which was fun seeing one of them experience trails for the first time and somewhat technical trails at that.

We have a 30K in two weeks and I’d rather run it a little slower and finish than blow something up and get a DNF.

Being we started at 6:30 a.m. in the dark and 27 degrees there was no one else there. There was a car in the parking lot when we pulled in but they left before we got started. It’s weird how that happens…

For instance yesterday I ran with my real wife and secondary running wife and there were 4 or 5 cars in the lot that people just sat in. I find that odd. I’d rather be at home or anywhere but a parked car in a park parking lot on a cold day.

Yesterday’s run was just a low speed maintenance run or that was the intent but at mile 3.79 I came down with a massive case of cramping in my left hamstring, enough I had trouble walking much less running. As it happens I wasn’t too far from the car so I was able to hobble to it and call it a day while my wife finished her run. And I was seriously energy deficit during that short slow run.

I was concerned today with our long run but I loaded up on magnesium, salt tablets, pedialyte, turmeric and tart cherry extract last night and I was ‘okay’ today. It felt like my hammies were on the verge of cramping after 5 or 6 miles in but they played nice and didn’t.

I’ve restarted my PT again due to ITB issues coming back and I’m doing a fair bit of resistance training with a elastic band and ankle cuff including back kicks so that I’m sure had something to do with it. On top of that I spent most of the day before the run at two different funerals which are energy sapping to say the least. Funerals also drive home the fact that we have a finite amount of time to do the things we might like to do before the end. And at age 52 my time is more limited than a lot of folks. So it left me feeling the pressure a bit of trying to accomplish my goals regarding running. i.e. do a marathon, do a 50K, consider a 50mile, think about a 100mile.

Tomorrow is an off day both from work and training so I’ll do more leg PT and maybe some curls, the ‘guns’ are sad these days. Not that they’ve ever been impressive but they certainly have looked better.

Moral of this story is, there are good days, bad days and days that don’t matter in the slightest but you have a limited amount of days to experience so take some time to get something done other than watch another vapid episode of some sit-com, rom-com, drama or worst offender of all a ‘reality’ show. There is very likely to come a time you’ll do the ‘if only’ game with yourself.