Finally I have (unofficially) broken my 12-year-old Half Marathon PR. Today, thanks to the creative planning of my RH, we Raced The Dawn and I managed break my record by a whole 1:01 for a total finish time of 2:15:15. This was no easy task, and it surprised me just how difficult it ended up being given how confident I was in my abilities to break this record.

What made it so difficult you ask?  (You probably didn’t ask, but I will tell you anyways.)

For starters, in order to make this happen it required extra hydration over the last few days which resulted in numerous trips to the bathroom, including in the middle of the night; eating when it’s rush-hour at Luby’s (5pm); going to bed before 8pm; getting out of bed at the early/late hour of 2am; and leaving my house 45 minutes later, so T-Rex and I could meet at the half way point, stash a vehicle and water reroute, with just enough time to spare to start our “race” at 3:57am (PR time – Sun Rise time).  As previously mentioned in another post this was a re-run of The Golden Driller route, at which this year I failed to break my PR; and at which last year was cancelled on account of torrential rains, gale force winds, and considerable lightning in the area. This resulted in our not getting to run the half marathon we were trained and ready to run, and the decision to plunk down the premium last minute entry fees for the OKC Memorial race the following day, and we know how that race ended up now don’t we?

The official race conditions this year were near perfect for a PR, but it seems our re-run was not able to escape the ‘Curse of the Golden Driller’.  As we arrived at the park, much to our amusement, once again we were met with a torrential downpour, strong winds, and lightning. As we sat in the car watching the sheeting rains there was nothing to do but laugh and check the radar again. Luckily the worst of it passed quickly over us and we were left with steady light rains and winds with cloud-to-cloud lightning far enough away not to be of danger, and just enough time to make our official start time.

So into the rain we stepped, found our official start/finish segment of pavement, set our watches to the same race program we used three weeks ago, and then set off at our race pace. 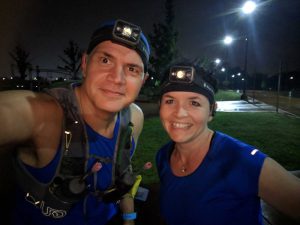 The weather being what it was actually cooled the morning off enough so that overheating wasn’t as big of a problem as it threatened to be, but all the water on the trail eventually soaked our shoes completely, and by the end of the race I was weighed down, drenched in water from head to toes. My soaked clothes and shoes probably added a good 2lbs of dead weight. But the rain made nice sounds as we ran under the trees that canopy the trail in several areas, so there’s that at least.

It being as late/early as it was and pitch black thanks to the clouds, we discovered that the Riverparks trail lights don’t blaze all night. Luckily we had headlamps to light the trail and all the frogs that hopped in front of us.

And unlike a sponsored public race, and because of the ungodly hour of the morning, in the rain, there was no one else on the trails running but T-Rex and I, which has its pluses and its minuses. On the plus side, you don’t have to constantly bunny hop around other runners, forced to weave and dodge around them expending additional energies. Also there is something nice about the quiet of running in the middle of the night in the rain. Meditative. But on the minus side there were no cheering fans, or by-standers, no support, no one to catch up with, and lastly the lack of energy and enthusiasm that comes from the race high. Not that T-Rex wasn’t good company, quite the opposite, although we ran mostly without conversation on account of the harder pace and need to conserve oxygen, which felt scarcer thanks to all the moisture in the air.

Eventually I was given the direction to “go on without me,” and unlike last-time I did.  Right around mile 10 I broke away and hoofed it as fast as I could go at that point, which wasn’t nearly as fast as I had hoped for and squeaked into the finish with just a minute to spare. But my speed vs T-Rex’s gave me just enough time to grab my celebratory supplies, to setup some finish line tape, and open a confetti popper as he crossed the finish. Mission accomplished.

Many things are sacrificed in the pursuit of one’s personal best. Today that sacrifice was sleep, energy, wear-n-tear on the body, and time with family while I mostly lazed around the house in recovery from my run. I was completely deplete of the energy needed to do more energetic activities most of the day, stove up with some muscle knots in my back, and I couldn’t to do much with my family besides sit around and watch movies. Although I did take them to the pool hoping to help them burn off energy and give me a chance to soak in the hot tub, but the latter didn’t happen and I ended up in more pain than when I went in. Oh well, put some mom points on the board for sacrificing recovery for making happy memories with the kiddos, and hopefully this spasming pain in my back will go away with proper rest home treatments.

But, for me, the sacrifices made were worth the feeling of accomplishment that came with finally putting this PR win on the board. And because no race would be complete without bling, separately–unbeknownst to each other,  T-Rex and I both made, and had made, special awards and medals to make official our First Place Male and Female statuses of Race the Dawn, a RunSalty production. 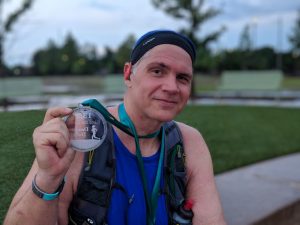 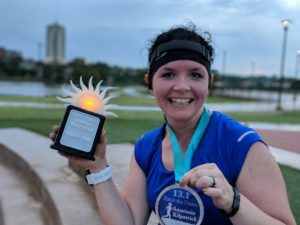 Today turned out to be one our most memorable and fun events, and though T-Rex doesn’t know it yet, I am going to propose that we do this again next year, and turn this into a yearly event. Next year maybe our friends will join us as we try and beat the sunrise again and break the curse of the Golden Driller.