Week 2 Long Run AKA as SNAKES AND SPIDERS

Week 2 of our 50 plan has come and gone and we did our back to back long runs over the weekend.  One of the things I’ve put in our training schedule is one weekend a month we do both long runs on the same day, one in the morning, one around 9:00 p.m. 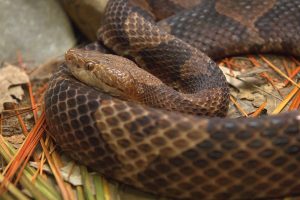 This weekend we did the night run on the Snake trail at Turkey.  There’s a reason it’s called the Snake trail.  We had to shoo off, go around or jump over about half a dozen copperhead snakes between 18″ to maybe 30″ long.   Copperheads are typically non-aggressive and rarely fatal although they can leave you with some pretty nasty tissue damage.

The snakes were somewhat easy to spot in advance, it was the giant spiders constantly spinning webs across the trail as we did the multiple out and backs that were really annoying.   Being the slowest #boatanchor member of the group running I ran in front mostly to set the pace and as a result I got to clear the path of all the spiders and webs as we ran.  Mostly by running through the webs. 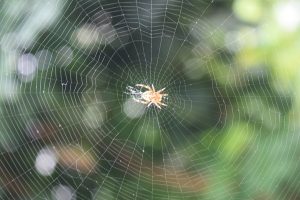 On week 5(ish) of dropping carbs from the diet and I’m still feeling the hit to some degree.  My pace is off by a fair bit for one, heart rate still on the high side for any given pace and in general just don’t feel ‘fast’ not that I ever did but it’s worse. A factor in this is that I don’t really have a ‘low intensity’ speed so converting stored fats to fuels is slow for me.

One semi-interesting thing is that even though we’d already done one 9 mile run that morning the second 9 miles that evening didn’t feel much different than the first one.

On a more useful topic is lighting.  Running Wife #1 forgot her headlamp and I didn’t have the spare I normally carry with me so I loaned her my headlamp and used the backup backup light I carry in my bag.  It’s one of many flashlights I’ve carried for a few years now, a Quark / 4 Sevens light, I’d give the model but you can’t get them anymore.   On medium which I used it puts out about 160 lumens OTF which I found very usable.  Not great at that setting for spotlighting far up the trail but I didn’t need to see that far out.

The biggest take away is that a light that’s not in line with your face is far more useful in terms of spotting hazards that might trip you up due to the sole fact that it casts shadows you can see unlike a light 1″ above your eyes.

As a result I’ve been doing a fair bit of research on lights, specifically L shaped lights I can use to attach to a belt or vest or carry easily and more naturally in my hand as I run.

I have some very specific needs though which makes it tough (impossible) to get a perfect light.

I’ve ordered the WowTec A2S, got it today actually and a Zebra to test out.  Will likely pick up a Skilhunt as well.

Here’s the bigger problems I have – None of these lights are programmable so you have to use the settings they come with.

None of them have the perfect light levels for me.  I’d like a medium or high around 250-300 lumens to get the best efficiency at that level for me.   I’d like another setting in the 150-190 lumens range.   One that’s around 20-30 lumens and a ‘moonlight or firefly’ mode.

I need them to have a decent spill as well as okay spot but without a hot spot and I need it in a warm color range to make it easier to spot things like snakes that are almost the same color as the dirt I’m running on.  Warmer lights to me make it a fair bit easier to distinguish smaller color changes in greens and browns.

The TURBO!!!! modes I have no use for personally.   I just don’t see a point in having a light that in theory can throw 1100 to 2500 lumens for all of 30 seconds before the temp controls cycle it down significantly nor having a light that on the highest sustained power that doesn’t burn it up lasts an hour.

“Why don’t you get a dedicated trail running light?”

Good question, best answer I have is that Trail running specific vendors are lagging behind lighting technology and in general aren’t cutting edge in technology.   Not that bleeding edge is necessary or even a great thing but when it comes to a light the fewer batteries you have to potentially carry, the tougher the thing is, the more light it throws per watt, these are all good things.  And frankly most of them are pretty expensive for what you’re getting compared to the rest of the lighting world.

As I test these various lights specifically as options for trail running at night I’ll post my thoughts of each one, stay tuned.