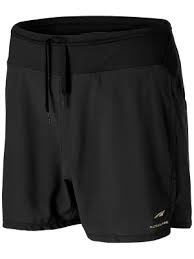 In my seemingly till now never ending quest to find a pair of shorts to go really long in I’ve come across the Altra Trail 2.o Shorts.

#GingerRunner likes them and they made his top 5 shorts lists for 2018 and I’ve found over the last couple of years that we tend to have the same opinion on various pieces of gear that we have used in common.

Overall the fit is good, loose but not baggy. Which was a relief.  Although I did buy them from Running Warehouse which has a good return policy.   The waistband is slightly elasticized and there is a drawstring that ties on the outside in the front.  That means no knots, bows or strings inside your shorts to cause a potential chafe point.

The material is soft and on the light-medium weight side.

There are two slanted mesh pockets on the sides that are rectangular and about the size of an iphone 5-6.   They are stretchy so you could stuff a fair number of gels in them.   In the front left is a shallow horizontal pocket that’s big enough for a credit card, a key or two or something of that ilk.  But this pocket has no closer on it, no zip, velcro or overlapping flap.   Use it at your own peril.

In the back is a open sleeve that could be used to hold a light jacket or a pair of gloves or arms sleeves or something like that.  Under the sleeve is a zip pocket that holds a Pixel 2XL quite easily.

One minor thing I found is because the waistband is soft and only a little elastic after 5k my phone had pulled the shorts down a bit after the material had gotten soaked through with sweat.   This could be fixed by tying the drawstring tighter.  BUT… because it’s your typical string based drawstring this might cause a potential chafe line for you if you really load down the shorts with loot.

These trail shorts have a built in boxer liner which I like and the ends are hemmed just right for my quads to be tight enough but not too tight so that the liner doesn’t ride up.   Pretty important for someone like me.

I ran them for the first time today, just a 5k though.  But other than near the end that after sweating them through and them stretching a bit that they were getting pulled down by the weight of my phone they really just disappeared during the run.  And pending issues showing up on a long run these look like a very real candidate for being my 50 shorts.

I also have a pair of 2XU compression tights that I’ll be testing to see if they will work for me for long runs.   With the potential temps of the Dead Horse 50K we’re doing in November ranging from 30 to 50, dressing appropriately may be tough.   I have a feeling it’s going to be a cold start and being a bit underdressed so as to be comfortable for most of the run.   Still not sure if I’ll be doing shorts or tights for it, probably take both.