tl/dr; Made a medal display piece that I ended up liking and as it’s not something I’ve seen before I thought I’d share in case it sparks an idea for anyone else. I know for a lot of runners, medals are just a useless chocktke cluttering up the house but each one is a memory for me. Side Note: if you truly don’t want your medals there are non-profit organizations that will take them and put them to good use and use them to brighten the lives of children and adults with serious health issues.

Over the weekend with all the races canceled I decided to drag out the medals and figure out a new way to display them. Every other option so far has just not been satisfactory, too big, bulky, can’t see the medals, whatever. The last one tore out of the wall. My primary goal was to keep the display in a reasonable dense fashion but to all each medal to be seen in all it’s cheap glory. And to have it self supported with at most a single screw to keep it from toppling over.

To do that I purchased 3 pieces of 1x6x6′ poplar from a big box store. Yes it’s not great wood, yes its stupidly over priced but I needed s4s because I lack such things as a jointer and planer and band saw and decent table saw and etc and so on.

With the other two pieces I cut them into 6 total pieces that were 1x6x24 pieces.

5 of these I ‘resawed’ down the long center to give me a total of 10 pieces that were 3/8x6x24. It took two passes with my job site table saw and let’s just say they were not uniform thickness and call it a day.

This display could also all be done as well using 1/2 or 1/4 plywood and 1×2’s and a circular saw. Use the 1×2’s for the frame and bracing and the plywood for the display pieces.

Side Frames: For the sides cut a rabbit in two of them giving me a notch to set the display boards. I saved the cut out pieces for additional bracing and trim.

Back Bracing: I used the third piece of the first board by cutting into 3 pieces and making half laps at the ends such that they would overlap the backbracing with a 1/4 thickness.

I notched the back side of the frame pieces so they would clear the base moulding then glued the bracing pieces in 3 spots up the back. The 1/4″ thick lap joint meant the side frames would stand away from the wall by about a 1/4″ and it would be the bracing that touched it. I used a single 3″ sheet rock screw through the top brace into a stud to hold it to the wall. I never use drywall anchors for anything much less anything heavy.

I notched the shelf piece so it would fit in the rabbit a few inches from the top of the frame pieces, slid it into place and glued it. The top brace acts as a back stop to keep things off the wall.

I then measured down the height of a standard racing bib and put in a piece of trim. Using about a 3/16″ spacer I glued the 10 front paces in place in the rabbit of the frame pieces working from the top own. This left a few inch opening at the bottom. You could plan ahead and cut your frame sides down to minimize this. In end it doesnt bother me and I wanted the display to be as tall as it was.

I used some of the random trim to put a lip around the shelf things wouldn’t fall off.

I used some regular old nails to act as bib pins to hold the bibs.

A couple of coats of poly and I called it done. There are no nails, biscuits, dowels in this build, it’s all Titebond II and is extremely sturdy. I’ve found the wood gives way before Titebond does.

Medals are added by slipping the ribbons through the spacing between the display boards and letting them hang down behind the front panels out of sight. A small piece of foam is pushed into the gap to hold them in place. I thought about 3d printing some V shaped to act as spring pieces but the foam was handy and quick and worked really well.

For smaller medals like 5K’s or from back when medals were just smaller you can stagger them and really pack them in a line. For the longer distance races or the egregiously large medals not much you can do, they take up a lot of space.

While the foam piece worked for everything, it didn’t work for the little rock medal, the thing weighs like 3lbs. But I was able to loop the ribbon around that small trim piece at the top and simply tie it off.

Anyway, I’ve never seen this kind of display before and in the end I kind of like it, it holds 3 years of medals for me in about as small an area as i might hope for while still letting me see each medal in it’s entirety. 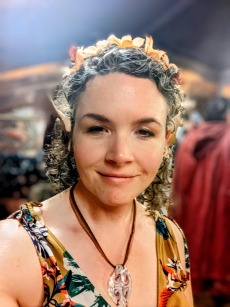